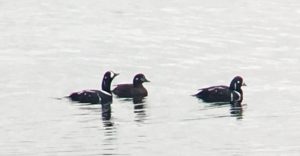 I have always liked the concept of reading. Tons of emotion and information packed into a bunch of words, leading to images formed inside your head using your own imagination. It is incredible to put yourself in someone else’s adventure while making it your own. I still remember reading “Mr. Mysterious and Company” back in 5th grade.
The reality is because I spend so much time savoring all the words it takes me a while to read books and I often lose interest. I’ve tried speed reading, but I end up daydreaming when I am supposed to be comprehending what I’m reading. Stacks of unread books sit on my shelf and half-read books sit next to my bed. So when my in-laws gave me a book for Christmas this year, while the title intrigued me, I wasn’t too excited for yet another book I probably will never get to.
Not sure what motivated me back in February to pick up this book. Probably I was waiting for a friend to play a move in Words with Friends (another reason books remain unread). I started reading Birding Without Borders by Noah Strycker and three chapters in the switch had been flipped. I got up from bed (probably about midnight) and got online to sign up for e-bird and bought a new, more functional, pair of binoculars. When I went back to bed I started listing all the birds I already knew that could get me towards my (very) modest goal of seeing 100 bird species this year. I came up with 80 and then fell asleep.
I have been into wildlife my whole life, and thanks to learning from my incredible colleagues when I worked at Discovery Park, I have also been capable of knowing what many of the birds I am looking at. But I have almost never “gone birding” and certainly didn’t wake up early on a Saturday to go see what was migrating through.
Thanks to a book I have made the switch from “bird enthusiast” to “aspiring birder”. The difference being that I am not only interested in knowing what I’m looking at and appreciating nature, but now I actually seek out these animals and spend time trying to understand the subtleties between species. I am enjoying setting goals to find specific birds, and when you submit a checklist on e-bird your tally gets compiled to an international data base dedicated to bird knowledge and wildlife conservation.
As with all goals, I have now reassessed what is possible now that I have started working towards it. My 100th bird species (a Common Sandpiper) was seen in Italy over a month ago (thanks to the help of bird guide Marco Valtriani). My 100th bird species in the United States, 149th of the year, was fittingly just seen in my in-laws’ back yard (an Evening Grosbeak). Now I am going for 100 species in Washington State. 31 more to go. While the goals are fun to achieve, and quite small for most birders, what I am really loving is getting to know who lives in the places I visit – whether my backyard or a destination I’m traveling to. It is fun to look forward to waking up early on a weekend to go hang out in nature. And it is usually quite peaceful out in parks before most people get there.
Strycker’s insane goal of seeing 5000 species (about half the world’s known bird species) in one year might sound like just another tale about a man trying to add another notch to his belt – not the type of thing that typically interests me. Instead, it was a story about what can be accomplished when humans work together. The power of a global community’s love of nature and wildlife. What I appreciated about this book is the combination of travel story, wildlife watching log, and what is great about humanity. Even with the tally of birds counting in the background, the showcase of the story was the birds being described in incredible detail. And the heroes of the story were the dedicated and knowledgable birders that are now found in almost every corner of the globe. Their passion and knowledge is what helped Strycker surpass his goal by over 1000 species, and they are working hard to help in conservation of these creatures that face enormous pressures from human encroachment and climate change. Can birding save the world? I think it can at least help in conservation of wildlife. I think it also helps connect people around the globe, and better connect people to the places they travel. Most importantly, I think birding opens up our eyes to seeing the beauty and complexity of nature.
You don’t have to be a birder to like this book, but be careful you may want to become one after reading it.
Here is the book that got me interested in birding:
Birding Without Borders 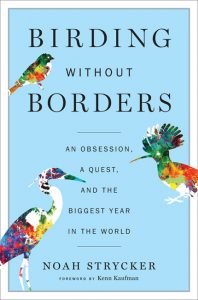 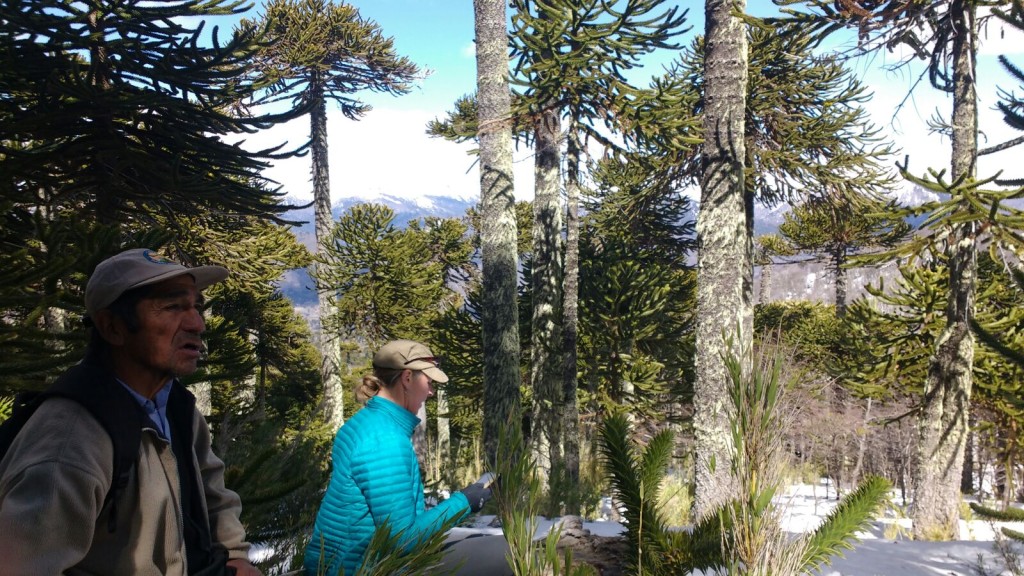 I had the opportunity to visit this community after attending the Adventure Travel World Summit in Chile, thanks to Juan Ignacio Marambio of Travolution – a Chilean company that connects international travelers to indigenous community based tourism. Juan has been working with the Quinquén community for several years and assisted them in developing a program that shares their story and specificaly their work to save the Araucaria tree from being wiped out.

The Araucaria produces a piñon, or seed, that people in this region have depended on forever as part of their diet. That is why this groups name for themselves is Pehuenche. Pehuén is the Mapudungun (the Mapuche language) word for Araucaria, so they are people of the Araucaria. The Araucaria is sacred and viewed as brothers and sisters.

In the late 70’s and into the 80’s Chile was in the midst of its neo-liberal experiment, where corporations were given lots of power to reap profit from Chile’s vast natural resources. The timber industry expanded rapidly during this time and the ancient Araucaria forests were a prime target. Without any recognition that the land they were clearing was home to communities that have cared for and depended on these trees for millenia, the loggers moved in and spared no tree. After the pain of seeing their sacred tree nearly eliminated from the landscape, the community of Quinquén had enough. In the mid 80’s, with the support and advice of some international conservation organizations, they placed their own bodies on the line. Litterally forcing the logging companies to kill them if they wanted the trees. The military dictatorship sent the army in to do just that, but the Pehuenche people asked the powerful Araucaria trees to bring a snowstorm to stop the military. That night clear skies turned dark and it snowed more than anyone had ever witnessed in one night, and the army was prevented from committing their atrocities. This gave the community and their NGO allies more time to save their remaining forests.

The Araucaria is now a protected species in Chile, but the powers that be have a way to turn this against those that fought to save the tree. First, the loggers, upon leaving the territory committed numerous acts of deliberate sabbotage – felling trees that they had no intention of using, setting forest fires, etc. Additionally, the law says that no part of the Araucaria can be used. So it is officially illegal for Pehuenche people to harvest the Piñon or the downed trees and branches, as they have done for milenia. The final dagger in the gut is that their is no mention of this struggle in the conservation of the Araucaria. The official story is that the governement realized the importance of the tree and decided they should be saved.

Responsible and sustainable tourism is more than just creating economic benefits to communities. It is about giving voices to people whose history has been excluded from history books and whose contributions have the power to inspire future generations to conserve and respect the balance of nature. 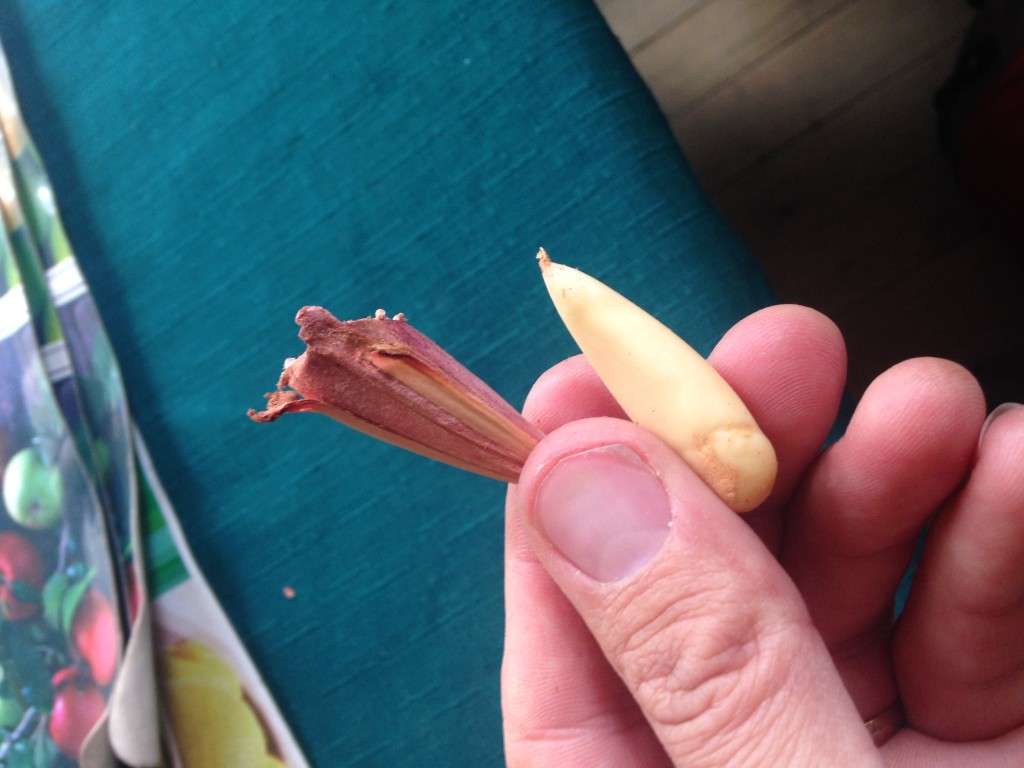